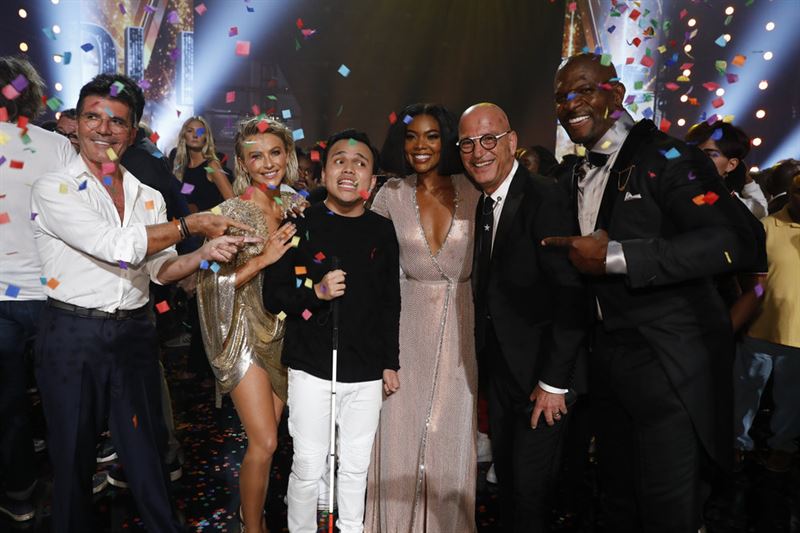 UNIVERSAL CITY, Calif. – Sept. 18, 2019 – The votes are in and America has chosen Kodi Lee as the winner of “America’s Got Talent” season 14. Lee wins the show’s $1 million grand prize and will headline “America’s Got Talent Live” at the Paris Theater at Paris Las Vegas Nov. 7-10.

Since first stepping on the stage, Lee captivated viewers with his talent, poise and skill. His initial audition performance of Donny Hathaway’s “A Song for You” revealed his gift to the world and earned a Golden Buzzer from judge Gabrielle Union. That audition clip is the show’s most viewed video clip this season with 439.3 million combined total views across Facebook, Twitter & YouTube.

Lee was born with optic nerve hypoplasia that rendered him legally blind at an early age. He is also autistic and suffers from Addison's Disease, which is a life-threatening disorder that can be fatal if not monitored. Throughout his life, the one thing that stayed constant is his connection to music and his amazing ability to retain, understand and express himself through song. He taught himself to play the piano and performs with pure emotion and astonishing skill. His goal in life is to share his music with the world and to make people happy.

Lee performs locally near his Lake Elsinore, Calif., home at a variety of venues, including local restaurants, wineries, and music events around town. His musical repertoire ranges from rock and jazz, to R&B and pop. He has mastered classics such as Bach, Chopin, Mozart and others. He also recently picked up tap dancing and is one of only a few that can tap dance and sing simultaneously.

The season finale also featured special appearances from Oscar, Emmy and Grammy Award-winning actress, singer and entertainment icon Cher, who rocked the house with a high-energy performance of “Waterloo,” and Grammy Award winning singer, choreographer, dancer and producer Paula Abdul, who will soon be seen at her Las Vegas residency “Forever Your Girl,” which debuts this October.

“America’s Got Talent” has dominated the summer television landscape as the #1 most-watched entertainment program every week this summer, averaging 12 million viewers overall in “live plus seven day” results from Nielsen Media Research. It has remained the #1 most-watched summer alternative series for each of its 14 seasons.

The show is a digital/social hit as well and has amassed 2.5 billion views across all digital video platforms so far this season. The show is also the #1 most-social broadcast series of the year (40.7 million Total Interactions to-date in Linear metrics, Source: Nielsen Social SCR, 1/1/19-9/17/19. Linear Metrics. Broadcast Series only. All dayparts. Excludes News & Sports).

The “Got Talent” format has had more than a billion global viewers since it began airing in 2006 in America and has aired in 194 territories worldwide. “Got Talent” holds the Guinness World Records title as the Most Successful Reality Television Format in history, with 70 local versions produced across Europe, Asia Pacific, the Middle East, Africa and the Americas.

For more information, please visit the official show site at: http://www.nbc.com/agt and the official press website at https://www.nbcumv.com.

ABOUT FREMANTLE
Fremantle is one of the largest and most successful creators, producers and distributors of scripted and unscripted content in the world. A global entertainment powerhouse, Fremantle has an outstanding international network of production teams, companies, and labels in over 30 countries. Fremantle produces in excess of 12,000 hours of original programming, roll out more than 70 formats and air 400 programs a year worldwide. The group distributes over 20,000 hours of content in more than 200 territories. Fremantle is also a world leader in digital and branded entertainment, with more than 370 million subscribers across 1,500 social channels and over 100 billion views across all platforms.

Fremantle is part of RTL Group, a global leader across broadcast, content, and digital, itself a division of the international media giant Bertelsmann.