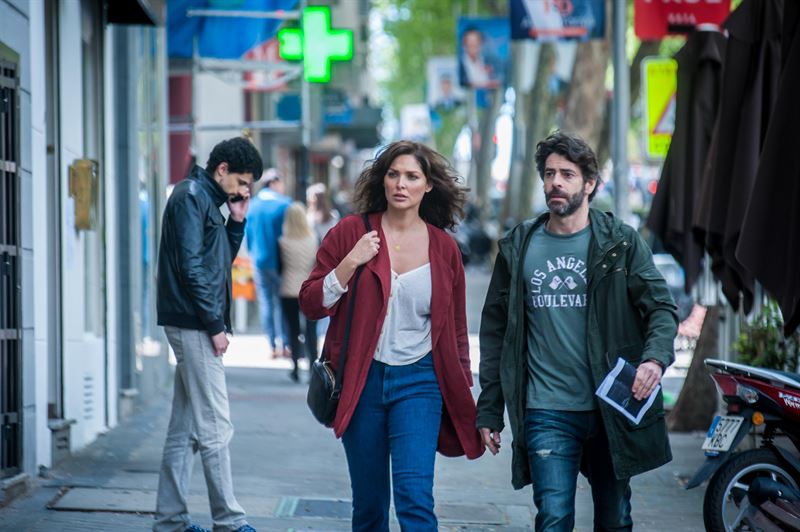 Directed by Alejandro Bazzano, No te Puedes Esconder follows Monica (Blanca Soto), and her daughter Natalia (Samantha Siqueiros), as they flee Mexico to escape from their past, an abusive husband and a criminal network. After establishing new identities in Madrid under the U.S. Federal Witness Protection Program, they begin to rebuild their lives. Here, they will encounter a former policeman turned hitman, a photographer obsessed with death and a politician with forbidden relationships. All of them, unknowingly, are united by half-truths, which will expose their darker side as they cross paths, ultimately compromising their lives.

“When I first read the script, I was fascinated with the storyline, which is the real star of this series… I couldn’t stop reading, and was amazed to learn about the cast from Spain and México,” stated Blanca Soto. “The opportunity to play Monica, a strong resilient woman capable of doing the impossible for her family, is what I like most as an actress and as a human being. We need to show dark moments to see the transformation and beauty in it all. The aspirational aspect is the most important element audiences will relate to.”

“No te Puedes Esconder is a fantastic thriller that is going to captivate audiences, not just because of its high-quality production standards, but because of its stellar cast featuring some of the most talented actors today,” said Marcos Santana, President of Telemundo Global Studios. “We are delighted to have Blanca back on Telemundo and are proud to offer such an impactful and relevant limited series as we continue to set a new standard in Spanish-language story-telling.”

About NBCUniversal Telemundo Enterprises
NBCUniversal Telemundo Enterprises is a world-class media company leading the industry in the production and distribution of high-quality, Spanish-language content to U.S. Hispanics and audiences around the world. This fast-growing multiplatform portfolio is comprised of the Telemundo Network and Station Group, Telemundo Deportes, Telemundo Global Studios, Universo, and a Digital Enterprises & Emerging Business unit. Telemundo Network features original Spanish-language entertainment, news and sports content reaching 94% of U.S. Hispanic TV households in 210 markets through 30 local stations, 51 affiliates and its national feed. Telemundo also owns WKAQ, a television station that serves viewers in Puerto Rico. Telemundo Deportes is the designated Spanish-language home of two of the world’s most popular sporting events: FIFA World Cup™ through 2026 and the summer Olympic Games through 2032. Telemundo Global Studios is the company’s domestic and international scripted production unit including Telemundo Studios, Telemundo International Studios, Telemundo International, as well as all of the company’s co-production partnerships. As the #1 media company reaching Hispanics and millennials online, the Digital Enterprises & Emerging Business unit distributes original content across multiple platforms, maximizing its exclusive partnerships with properties such as BuzzFeed, Vox and Snapchat. Through Telemundo Internacional, the largest U.S.-based distributor of Spanish-language content in the world and Universo, the fastest growing Hispanic entertainment cable network, the company reflects the diverse lifestyle, cultural experience and language of its expanding audience. NBCUniversal Telemundo Enterprises is a division of NBCUniversal, a subsidiary of Comcast Corporation.