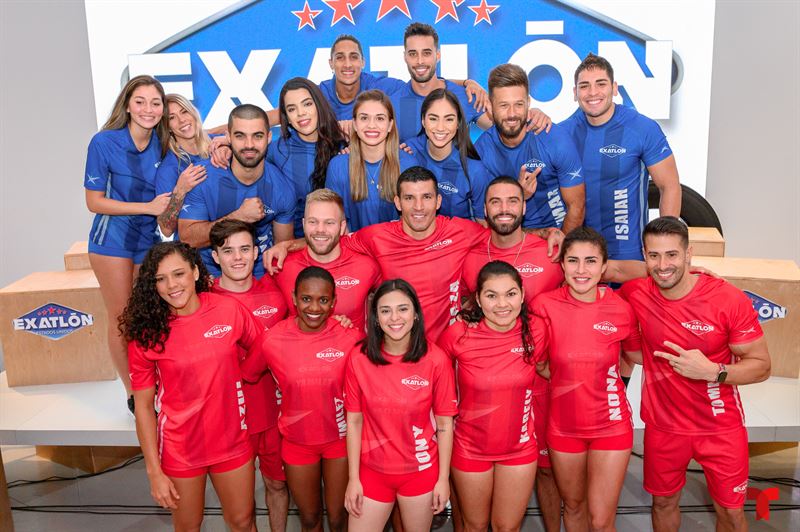 MIAMI, FL – January 7, 2020 – Telemundo introduced the official cast for the new season of its hit reality-sports competition, Exatlón Estados Unidos, slated to premiere on Monday, January 20th at 7pm/6c. The impressive and diverse roster of athletes is comprised by 16 new contestants and four fan-favorites from past seasons. The group of 20 will be divided into two teams, the Celebrity Team (Red Team) and the Contenders Team (Blue Team), to compete against each other for the ultimate prize of US$200,000. The audience and fans of the show can keep up with the latest news about Exatlón on Facebook.com/ExatlonEstadosUnidos, Instagram @Telemundo and Twitter @ExatlonTVEEUU, and get to know the contestants with “Never before seen” reality moments, fitness games and other fun challenges in our exclusive video series on Telemundo.com/Exatlon. Full episodes, highlights and extras are also available on the Telemundo App.

Sports commentator, Erasmo Provenza, returns as host of the intense and family-friendly show. Additionally, actress and model, Aelleen del Valle, joins the competition as the new on-site reporter to offer the audience exclusive behind-the-scenes access to the contestants and the competition.

Produced by Acunmedya for Telemundo, the adrenaline-filled program seeks to find the participant with the strongest physical and mental skills through a series of obstacle courses, extreme life conditions and total isolation from the rest of the world.

Meet the Cast for the New Season of Exatlón Estados Unidos

Mexican pro soccer player, Francisco Rodriguez was a member of the National Mexican Team from 2004 to 2015, and participated in the 2010 FIFA World Cup, celebrated in South Africa. The 38-year-old has also been part of important clubs such as Chivas (2006) and Club America (2013).

An American Spartan race champ based in Houston, Texas, the 27-year-old is a six-time American Ninja Warrior finalist, an engineer and philanthropist.

A Mexican fitness influencer, reality-TV star and host, Lozada is best known for his appearance on various reality shows.

A professional soccer player, the 24-year-old Mexican has played for Chivas and Club America. She started practicing soccer at age 9.

A 23-year-old youth gymnastics Mexican champion who has won 175 medals in junior competitions throughout his 18 years practicing gymnastics. He has also participated in international competitions including the 2016 and 2017 Pan American Games in Bolivia and Peru, respectively.

A 26-year-old Olympic gymnast from Dominican Republic, Peña has participated in many international and world championships including the 2012 London Olympic Games where she finished sixth in artistic gymnastics.

A Puerto Rican Olympic gymnast who showed outstanding skills on the rings representing Puerto Rico in the 2012 Olympic games. Ramos quickly became one of the fan-favorites during the first season of Exatlón thanks to his athletic abilities, speed, strength, charisma and team spirit.

A Mexican boxing world champion who resides in Los Angeles. A mother of two, López will be trading in her boxing gloves once again for a daring opportunity that will test her physical and mental endurance like never before.

A Mexican-American Spartan racer, Vidal is the youngest competitor to have finished the Spartan Death Race twice. The 26-year-old has also competed in Spartan Ultimate, Broken Skull Challenge and Million Dollar Mile.

An Argentinian cross-fit competitor. Based in Miami, the 26-year-old is a personal trainer, specialized in sports education.

A 24-year-old physical education student from Puerto Rico, this sports-enthusiast is also a personal trainer and gym owner.

A Venezuelan fitness dance instructor based in Miami, the ex-soccer player is a dance fitness instructor.

A 23-year-old Mexican artistic gymnast instructor who competed at a national level and practiced professionally for 6 years.

A 28-year-old Cuban personal trainer and model from Miami who is also a nutritionist and offers online fitness coaching.

A 23-year-old bodybuilder from Baja California who has followed Exatlón Estados Unidos since its first season and decided to audition to prove she can be in an international competition.

A Mexican trainer, motivator and top contender from season one who dominated the intense obstacle courses from day one, pushing the limits and breaking records all along his journey in the vigorous competition.

A professional Mexican fitness trainer and sprinter who was a semifinalist in the second season of Exatlón who is coming back to finish what she started the first time around.

An experienced sports commentator, Provenza has hosted Exatlón Estados Unidos since its first season. Originally from Venezuela, he was recently part of the official Telemundo FIFA team, providing coverage of the 2018 FIFA World Cup, and has received numerous accolades for his sports reporting, including an EMMY for “Best Sports Anchor” in any language.

Aellen del Valle is a Panamanian actress, model and industrial engineer. Also a mother of one, Del Valle is known for her TV appearances in Panama and her fitness journey on Instagram. A fitness and adrenaline junkie, the 28-year-old will fit right in with the intense competition.