On its 15th Anniversary, Titulares y Más Will Now Simulcast Live Across All Telemundo Platforms Including Telemundo, Universo, the Telemundo Deportes App, and Social Media; TYM will Also Expand to Peacock with Short-Form Originals 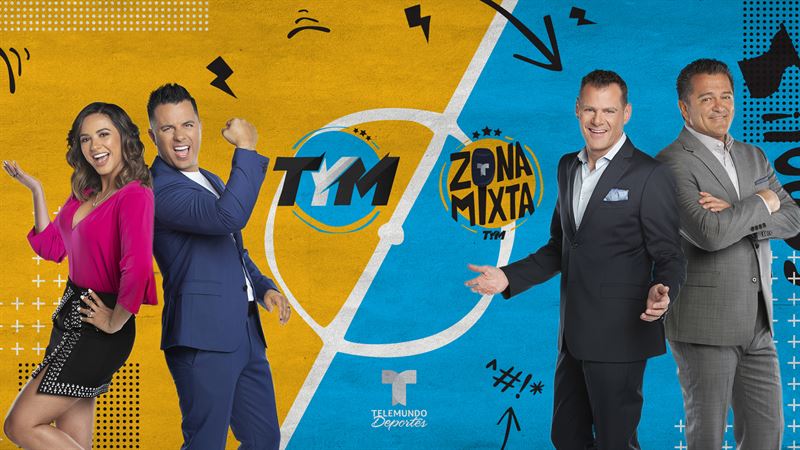 MIAMI – February 18, 2020 –Telemundo Deportes’ Titulares y Más expands to present fans an omnichannel experience. Starting in mid-2020, the #1 sports studio show in Spanish-language media, covering the intersection of popular culture and entertainment, will simulcast live across all Telemundo platforms including Telemundo, Universo, the Telemundo Deportes app, and Telemundo Deportes’ Facebook, Twitter and YouTube. TYM will air on a new time slot at midnight during the week, while the weekend edition will continue on its regular scheduled slot at 11pm ET (or following local news). In addition, TYM will launch original short-form content on Peacock, NBCUniversal’s new streaming service launching later this year, expanding the brand with original content from the show’s extensive library of segments and interviews, combined with content from TYM+, the show’s video podcast.

“We are reimagining TYM triggered by the Latino sports fan’s exponential growth in video consumption across all platforms,” said Ray Warren, president of Telemundo Deportes. “TYM is expanding and evolving to become a multimedia content brand tailored to the fan’s need and consumption habits while giving them a seamless experience across all platforms.”

This multiplatform expansion comes as TYM celebrates its 15th year anniversary with an all-encompassing rebranding of the show to deliver – in a casual studio environment – entertaining sports content that is an alternative to traditional sports television. The new format features dynamic segments and social media interaction produced to fit all platforms, as well as brand-new studio elements that include a new set look, graphics and music elements.

Titulares y Más weekend edition has been rebranded to Zona Mixta TYM. Led by Sports Emmy-Award winner Miguel Gurwitz and renowned Mexican soccer star Carlos Hermosillo, Zona Mixta presents the most popular, noteworthy and talked-about sports news of the week in a dynamic format and featuring a variety of segments including fan opinions and guest appearances who are engaged in different segments throughout the duration of the show.

During the week, sports experts Karim Mendiburu – who has been part of the show since it launched in 2005 – and Ana Jurka continue to deliver their fun, unique and irreverent style and one-on-one interviews with some of Hollywood’s most recognized TV, music and movie stars. The show renews its focus on sports culture and lifestyle stories bringing to viewers all angles of sports news beyond the field. In addition, the show will continue to present TYM+, its bi-weekly video podcast that gives Jurka and Mendiburu a unique platform to expand on the topics sports fans are asking for, while capturing a wider, younger audience. TYM+ is currently available via YouTube, Facebook and Instagram, debuting a new episode every Monday and Friday afternoons.

Over the last 15 years, Titulares y Más has gained a growing audience of loyal fans that have driven the show to the top as the highest-rated sports studio show in Spanish-language television among adults 18-49 for four consecutive years.

Titulares y Más launched in March of 2005, airing twice a week on Thursdays and Fridays with Karim Mendiburu, Edgar Lopez and Alejandro Blanco. Following its first eight years of success, the show expanded to five times a week in 2013; and in 2016, Titulares Telemundo, the weekend highlights show, evolved to TYM Fin de Semana. Throughout the past 15 years and more than 2,400 episodes, the show has covered the biggest news around sports and interviewed a wide variety of personalities including the biggest names in sports and entertainment such as Oscar de la Hoya, Canelo Alvarez, Julio Cesar Chavez, Sammy Sosa, Cuautemoc Blanco, Guillermo “Memo” Ochoa, Rafa Marquez, Shaq, Cristiano Ronaldo, Will Smith, Eugenio Derbez, Camila, Katie Perry, Daddy Yankee, Arroyadora Banda el Limon, and many more.