Selected by Viewers, The Best of Que Momento Relives Three of Their Favorite Stories: Francia Campeón – Their Identity, Diversity and Unity; The Unforgettable 2014 FIFA World Cup Mexico Match Against Netherlands #NoEraPenal; and the Nerve-Wracking, Final 60 Seconds of Three CONCACAF World Cup Qualifiers for Russia 2018, All Played on October 10, 2017 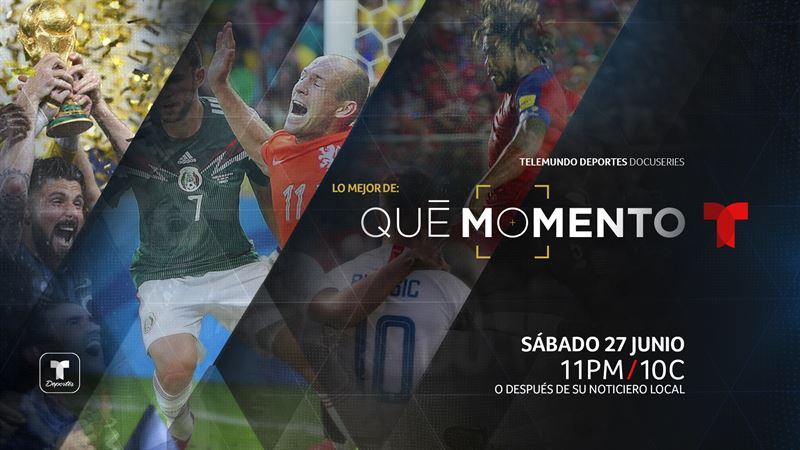 Miami – June 23, 2020 - Telemundo Deportes’ Que Momento returns with a special highlighting the show’s best stories selected by viewers via a social media vote and will relive their top three stories: Francia Campeón – their identity, diversity and unity; the unforgettable 2014 FIFA World Cup Mexico match against Netherlands #NoEraPenal; and the nerve-wracking, final 60 seconds of three CONCACAF World Cup Qualifiers for Russia 2018 that were played on October 10, 2017. The Best of Que Momento airs this Saturday, June 27 at 11 p.m. ET/PT on Telemundo and the Telemundo Deportes app, and re-airing on Sunday, June 28 at 10 a.m. ET/PT on Universo.

The special show will take viewers back to three unforgettable moments that marked the history of soccer. The show opens with the story around the nerve-wracking, final 60 seconds of three CONCACAF World Cup qualifiers for Russia 2018 that were played on October 10, 2017. The three historic games took place at the same time in three different countries, reshaping this soccer region. Everything was at stake for Team USA, Panama and Honduras, while Mexico, Costa Rica and Trinidad and Tobago were set to play crucial roles in this story. Telemundo Deportes was center stage as the exclusive Spanish-language broadcaster of all three matches. USA needed a win against the last-ranking team of the “hexagonal,” Trinidad and Tobago, to qualify; Panama had to face Costa Rica, which had already obtained its ticket to Russia, for the qualification; and an undefeated Mexico visited Honduras, which had to win at all costs in order to stay alive and play their last qualifying card at the intercontinental play-off.

The Best of Que Momento also relives the story behind the 2018 FIFA World Cup Champion France and how the team’s diversity, identity and unity were their biggest strength in achieving a World Cup. With a team mostly made of young players from diverse family origins, France found their very own identity to overcome obstacles and grow together to become the symbol of a generation that united a nation and led their championship. The story includes the analytical view of the three Hispanic rivals that faced France in the 2018 World Cup: Peru, Argentina, and Uruguay.

The third story relives the unforgettable 2014 FIFA World Cup viral moment #NoEraPenal when the Mexican National Team lost its chance to advance to a famed “fifth World Cup Match,” against Netherlands when many believed Dutch forward Arjen Robben flopped his way into a penalty kick with just minutes left in the game. The story captures the Mexican National Team’s (MNT) impressive and unforgettable journey leading into the 2014 FIFA World Cup and the aftermath of that #NoEraPenal moment that became a widespread cultural and viral movement that resonated around the world across social media.

The one-hour show will be hosted by five-time Emmy winner Andres Cantor and will feature new exclusive interviews since the shows aired including Felipe Baloy who scored Panama's first ever goal in a FIFA World Cup, world-renowned ex referee Marco Antonio Rodriguez who was part of the referee team in the 2014 FIFA World Cup and author Frederic Hermel, along with digital exclusives with Roman Torres, Hector Gonzalez Iñarritu, and Bonifacio Nuñez. Other soccer personalities featured on the original episodes include France’s World Cup-winning coach Didier Deschamps, the team’s captain Raphael Varane, historian Yvan Gastaut, Miguel Herrera, Andres Guardado and Javier Hernandez. Cantor will be joined by experts Emmy-winner Miguel Gurwitz and the renowned Sammy Sadovnik at the end of the show for a final segment that analyses the current state of the sports industry following the pandemic.

To complement the show, Telemundo Deportes' digital platforms will present the full episode of each story highlighted in the special show via Telemundo Deportes’ site and YouTube page. Telemundo Deportes digital also launched a special #TBT short-form segment via Instagram and YouTube that serves as an extension of Que Momento, reliving some of the most historic moments in sports on a weekly basis.

Que Momento is an original documentary-style sports series produced by Telemundo Deportes that takes an in-depth journalistic look at some of the greatest and most memorable moments in sports history. Que Momento builds the story from the ground up, reviewing precedents and historical context, while moving through various points of view and recollections from the protagonists, bringing viewers all angles of the story. The show gauges the extent of the “Moment’s” importance, its legacy and its impact on the life of an athlete, a team, a fan base, a country or the entire world.