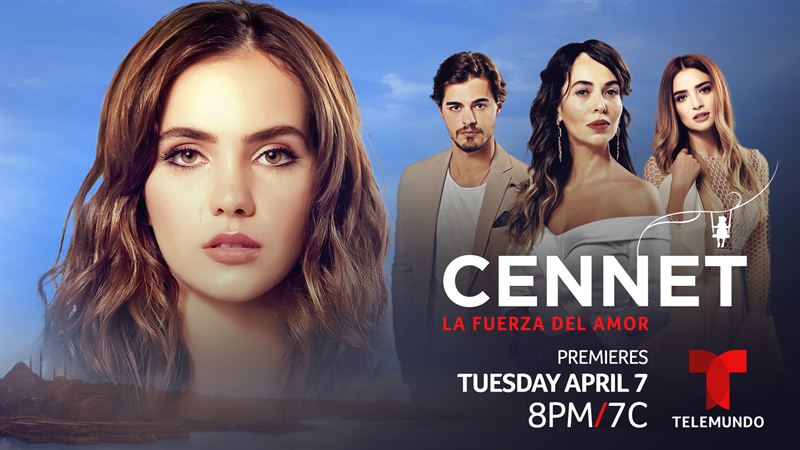 MIAMI, FL – APRIL 1, 2020 – Telemundo announced the premiere of the hit Turkish drama Cennet on Tuesday, April 7 at 8pm/7c. A classic story full of family drama and romance, the drama series tells the fascinating and aspirational story of a young woman on a journey of vengeance and redemption as she searches for the maternal love that was denied to her at birth. Viewers can follow this production on Facebook, Instagram and Twitter, or join the conversation using #CENNET on all social media platforms.

Cennet, a beautiful, determined and intelligent woman, became an orphan as a baby when she was abandoned by her mother and had to be raised by her grandmother. Despite her humble upbringing and limited economic resources, she becomes a brilliant architect landing her dream job at a successful architecture firm upon graduation. As her professional life is on the rise, Cennet’s personal life also takes an unexpected turn when she accidentally bumps into Selim, her childhood love, and her birth mother, both of whom vanished from her life many years ago and hold many answers to her past. In turn, Cennet’s nobleness and humility will arrive into their lives by surprise to teach them that it’s never too late for redemption.

Audiences will be able to view full episodes of Cennet live or catch up on the Telemundo app on Google Play Store and Apple Store or by visiting telemundo.com.

About NBCUniversal Telemundo Enterprises:
NBCUniversal Telemundo Enterprises is a world-class media company leading the industry in the production and distribution of high-quality Spanish-language content to U.S. Hispanics and audiences around the world. This fast-growing multiplatform portfolio is comprised of the Telemundo Network and Station Group, Telemundo Deportes, Telemundo Global Studios, Universo, and a Revenue Strategy & Innovation unit. Telemundo Network features original Spanish-language entertainment, news and sports content reaching 94% of U.S. Hispanic TV households in 210 markets through 30 local stations, 50 affiliates and its national feed. Telemundo also owns WKAQ, a television station that serves viewers in Puerto Rico. Telemundo Deportes is the designated Spanish-language home of two of the world’s most popular sporting events: FIFA World Cup™ through 2026 and the Summer Olympic Games through 2032. Telemundo Global Studios is the company’s domestic and international scripted production unit including Telemundo Studios, Telemundo International Studios, Telemundo International, Underground Producciones, an internationally renowned production boutique based in Argentina as well as all of the company’s co-production partnerships. As the #1 media company reaching Hispanics and millennials online, the Revenue Strategy & Innovation unit distributes original content across multiple platforms, maximizing its exclusive partnerships with properties such as BuzzFeed, Vox, and Snapchat. Through Telemundo Internacional, the largest U.S.-based distributor of Spanish-language content in the world; and Universo, the company reflects the diverse lifestyle, cultural experience and language of its expanding audience. NBCUniversal Telemundo Enterprises is a division of NBCUniversal, a subsidiary of Comcast Corporation.