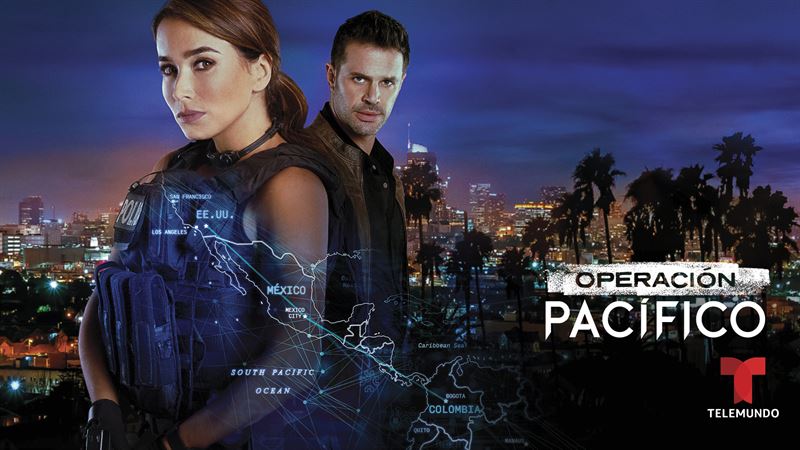 MIAMI – Jan. 07, 2020 – Telemundo announced the premiere date for new Super SeriesTM Operación Pacífico for Monday, February 10 at 10pm/9C. The police drama marks the return of Majida Issa (Sin Senos si hay Paraíso) to the network, alongside lead actor Mark Tacher (La Reina del Sur). Majida Issa plays the lead role of Captain Amalia Ortega, a strong empowered woman living a double life, whose mission is to take down the most wanted Mexican drug lord. Audiences will be able to view full episodes of Operación Pacífico live or catch up on the Telemundo app on Google Play Store and Apple Store or by visiting http://now.telemundo.com.

To download press materials to complement your coverage, visit www.image.net/OperacionPacifico, and to view a featurette video showcasing the main cast go to https://youtu.be/WIgi5RdaMko.

Shot in Mexico and Colombia, this 60-episode police drama centers on Amalia Ortega (Majida Issa), a fearless woman, wife, mother and captain of the Secret Intelligence Unit of the Police, who jeopardizes her career, her life and her family in an attempt to capture El Guapo (Julio Bracho), a mysterious and powerful Mexican drug trafficker. Only her focus and determination will help her fulfill her mission.

“On Operación Pacifíco we are going to see the other side of the coin and audiences will get to meet the heroes who fight for justice and try to end corruption,” said Majida Issa. “Having the opportunity to personify this dual character has been a privilege … audiences will relate to Amalia as she struggles daily trying to balance her personal and professional life,” she added.

“I am thrilled to be part of this new police drama where every detail was executed to perfection. From the stunts, to special effects, incredible locations, the amazing script and cast,” said Mark Tacher, lead actor. The production values and all those elements will keep viewers glued to their seats as they experience the intensity during the action scenes and witness the beautiful relationship grow between the main characters.”

Directed by Diego Mejía and Mónica Botero, Operación Pacífico is an original story based on true events. The concept was developed by Alberto “Albatros” González. David Posada is executive producer for Telemundo and Silvia Duran and Guillermo Restrepo are executive producers for FoxTeleColombia.

Audiences will be able to view full episodes of Operación Pacífico live or catch up on the Telemundo app on Google Play Store and Apple Store or by visiting http://now.telemundo.com.

About NBCUniversal Telemundo Enterprises:
NBCUniversal Telemundo Enterprises is a world-class media company leading the industry in the production and distribution of high-quality Spanish-language content to U.S. Hispanics and audiences around the world. This fast-growing multiplatform portfolio is comprised of the Telemundo Network and Station Group, Telemundo Deportes, Telemundo Global Studios, Universo, and a Revenue Strategy & Innovation unit. Telemundo Network features original Spanish-language entertainment, news and sports content reaching 94% of U.S. Hispanic TV households in 210 markets through 30 local stations, 50 affiliates and its national feed. Telemundo also owns WKAQ, a television station that serves viewers in Puerto Rico. Telemundo Deportes is the designated Spanish-language home of two of the world’s most popular sporting events: FIFA World Cup™ through 2026 and the Summer Olympic Games through 2032. Telemundo Global Studios is the company’s domestic and international scripted production unit including Telemundo Studios, Telemundo International Studios, Telemundo International, Underground Producciones, an internationally renowned production boutique based in Argentina as well as all of the company’s co-production partnerships. As the #1 media company reaching Hispanics and millennials online, the Revenue Strategy & Innovation unit distributes original content across multiple platforms, maximizing its exclusive partnerships with properties such as BuzzFeed, Vox, and Snapchat. Through Telemundo Internacional, the largest U.S.-based distributor of Spanish-language content in the world; and Universo, the company reflects the diverse lifestyle, cultural experience and language of its expanding audience. NBCUniversal Telemundo Enterprises is a division of NBCUniversal, a subsidiary of Comcast Corporation.