TELEMUNDO’S “LA VOZ” KICKS OFF ITS SECOND SEASON WITH THE BLIND AUDITIONS THIS SUNDAY, JANUARY 19[th] AT 9PM/8C

The First Group of Contestants in Search of the Coveted Title and the Epic $200,000 Cash Prize is Ready to Perform for Coaches Luis Fonsi, Alejandra Guzmán, Carlos Vives and Wisin

Contestants That Are Not Chosen Will Have a Second Chance to Return to the Competition Through El Comeback Stage on Telemundo.com 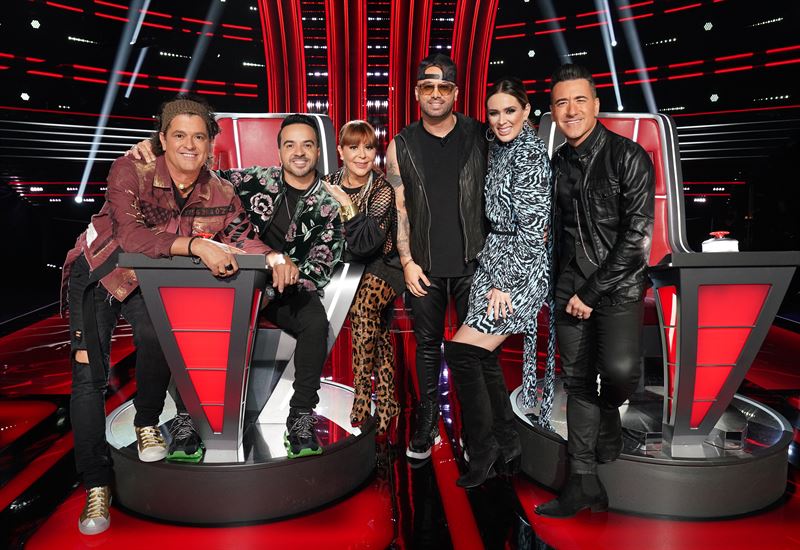 MIAMI – January 17, 2020 – Coaches Luis Fonsi, Alejandra Guzmán, Carlos Vives and Wisin will kick-off the Blind Auditions with the first group of contestants of the second season on Telemundo’s "La Voz," premiering this Sunday, January 19 at 9pm/8c. This season, the U.S. Spanish-language edition of NBC's "The Voice” will also debut El Comeback Stage, an innovative digital series that offers those contestants that are not chosen during the Blind Auditions a second chance to rejoin the competition and compete for the coveted title and $200,000 cash prize.

During the premiere, viewers will witness the first group of “La Voz” contestants perform for the coaches as they face away from the stage. If a coach is impressed by a contestant’s voice, he/she presses their red button to rotate their chair. If only one coach turns, the contestant is automatically on his/her team. If more than one coach presses the button, the contestant has the full power to choose his/her coach, which leads to a battle amongst coaches to convince contestants to join their team. If no coach turns, the contestant is eliminated from the competition and may have the opportunity to enter El Comeback Stage. Once the four coaches complete their teams of 12 during the Blind Auditions, 48 contestants will move on to the second phase of the competition, “The Battles.”

El Comeback Stage will premiere exclusively on Telemundo.com/LaVoz during the Battle Phase. Running parallel to the TV show, this digital series will offer the coaches the opportunity to bring back six of their favorite contestants who they did not turn their chairs for. Singer-songwriters and Latin pop duo Mau y Ricky, who will serve as the fifth coach of “La Voz”, will prepare these talented voices musically for fans to choose who will ultimately enter the final phase, the “Live Shows.”

During the “Live Shows,” all remaining contestants compete against each other in a series of spectacular individual on-stage performances. This is one of the most exciting phases of the competition where viewers vote for their favorite contestants and decide who will be crowned as the second season winner of “La Voz,” receiving a $200,000 cash prize, doubling last year’s prize of $100,000 compliments of Pepsi, and a recording contract with Universal Music Group to produce, record and commercially release a single.

Audiences will be able to view full episodes of “La Voz” live or catch up on the Telemundo app on Google Play Store and Apple Store or by visiting Telemundo.com/LaVoz. To download photos to complement your coverage, click here, to download the Key Art open this link here and interviews with coaches here. For episodic photos, click here.

Viewers can be closer to the action on “La Voz” with the latest scoop, interviews, music performances and photo galleries available on Telemundo.com/LaVoz and the network’s YouTube channel offering a unique backstage, all-access perspective with digital host Nastassja Bolivar, and across Facebook, Twitter, Instagram, Tik Tok and Snapchat via @Telemundo and @LaVozUS and join the conversation in all social media platforms using #LaVozUS, #TeamFonsi; #TeamGuzman; #TeamVives; and #TeamWisin.

Hosted by Jacky Bracamontes and Jorge Bernal, “La Voz” is a production of Telemundo and ITV Studios. The series is created by John de Mol, who serves as executive producer along with Cisco Suárez, EVP of Primetime Non-Scripted Programming at Telemundo, Macarena Moreno, and Moira Noriega.