TEAM FONSI’S JEIDIMAR RIJOS WAS CROWNED AS THE WINNER OF TELEMUNDO’S "LA VOZ," THE FIRST-EVER U.S. SPANISH-LANGUAGE VERSION OF “THE VOICE”

The 18-Year-Old Puerto Rican Singer Won a $100,000 Cash Prize and a recording contract for a single with Universal Music Group

The First Season of the Singing Competition Concludes in a Spectacular Night with Coaches Luis Fonsi, Alejandra Guzman, Carlos Vives and Wisin, Together with Music Superstars Ozuna, Reik, Sebastian Yatra and Yandel, Alongside Hosts Jacqueline Bracamontes and Jorge Bernal 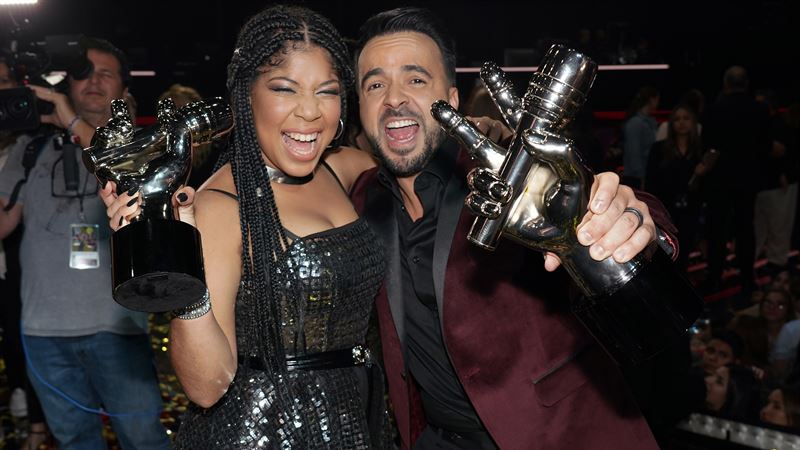 MIAMI – April 22, 2019 – Team Fonsi's 18-year-old contestant, Jeidimar Rijos, was crowned last night as the winner of "La Voz," the first-ever Spanish-language version of the Emmy Award-Winning NBC hit series, “The Voice,” when hosts Jacqueline Bracamontes and Jorge Bernal announced the results of the audience vote during the grand finale. The talented Puerto Rican singer who captivated viewers with her incredible performance of Marc Anthony's hit Preciosa during the semifinal, won the coveted trophy, a $100,000 cash prize and a recording contract for a single with Universal Music Group. The Coaches culminated the 13-week reality competition in a spectacular live show where the winning Coach, Luis Fonsi, joined music star Ozuna for the world premiere of Impossible, Alejandra Guzmán performed Hacer el Amor con Otro, Carlos Vives and Sebastián Yatra sang their hit Robarte un Beso, and Wisin took the stage along with Yandel and Reik for the launch of their new single, Duele. To download images from the finale, click here.

Beginning at the Blind Auditions, Jeidimar Rijos conquered the “La Voz” Coaches with her spectacular voice when she performed “The is Me,” from The Greatest Showman. Although all four Coaches turned their chairs, the lucky one was mega music star and Coach Luis Fonsi. Jeidimar, who was born on August 16, 2000, participated in Telemundo's "La Voz Kids.” She resides in Dorado, Puerto Rico, a town on the north coast of the island. Since childhood, her dream was to combine her passion for music and medicine to help children with terminal illnesses since her brother was diagnosed with an aggressive cancer. During her brother's stay at the hospital, Jeidimar not only sang to him but also to others who were hospitalized. Sadly, her brother lost his battle to cancer, but Jeidimar's dream remains in her heart.