QUE MOMENTO PRESENTS A GOLDEN FINAL, THE STORY BEHIND MEXICO’S HISTORIC SOCCER VICTORY AT THE 2012 SUMMER OLYMPICS THIS FRIDAY, MARCH 27 AT MIDNIGHT ON TELEMUNDO

Miami - March 23, 2020 – Telemundo Deportes, the Spanish-language home of the Olympic Games, presents Que Momento: A Golden Final, the story behind the Mexican National Team’s historic gold medal win against Brazil at the 2012 Summer Olympic Games. Que Momento will air Friday, March 27 at midnight ET (or following local news) on Telemundo and via the Telemundo Deportes app with re-airs on Telemundo on Saturday, March 28 at 3 p.m. ET and Universo on Monday, March 30 at noon ET. The special show will air as COVID-19 continues to impact the world of sports, including the pending decision to postpone the 2020 Summer Olympic Games.

Que Momento: A Golden Final brings viewers back to London 2012 when the Mexican National Team defeated soccer’s most renowned team and won gold. A story of a team that had to overcome controversy and scandal on its way to a triumph that regained the love and trust of its fans. Their coach, Luis Fernando Tena, bet that the key to success came from unity and dedication on the field which carried them until the final match against Brazil. With Mexican players such as Raul Jimenez, Gio Dos Santos, Marco Fabian, Diego Reyes and Javier Aquino, among others, the team restored pride in the hearts of millions of soccer fans and proved that anything is possible with hard work and dedication.

To complement the show, Telemundo Deportes' digital platforms will present Que Momento Extra, a series of additional short form videos that include deleted scenes, exclusive bites and segments reliving the most memorable moments of the competition. These short form segments include: Was the Medal Worth it?; El Tri: Faith vs. Reality; Youth Teams vs Adult Squad; As it Happened on Telemundo: The Last Minute of the Match; Post Interviews and Reactions following the match; and Medals and Anthem moments. This special content will be available on the Telemundo Deportes app and across Instagram, Facebook and Twitter leading to the show’s premiere.

Que Momento is an original documentary-style sports series produced by Telemundo Deportes that takes an in-depth journalistic look at some of the greatest and most memorable moments in sports history. Que Momento builds the story from the ground up, reviewing precedents and historical context, while moving through various points of view and recollections from the protagonists, bringing viewers all angles of the story. The show gauges the extent of the “Moment’s” importance, its legacy; as well as how it impacted the life of an athlete, a team, a fan base, a country or the entire world. 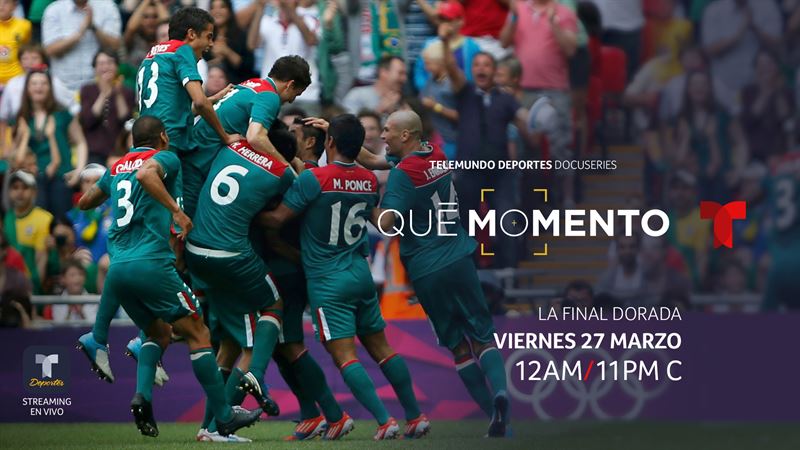