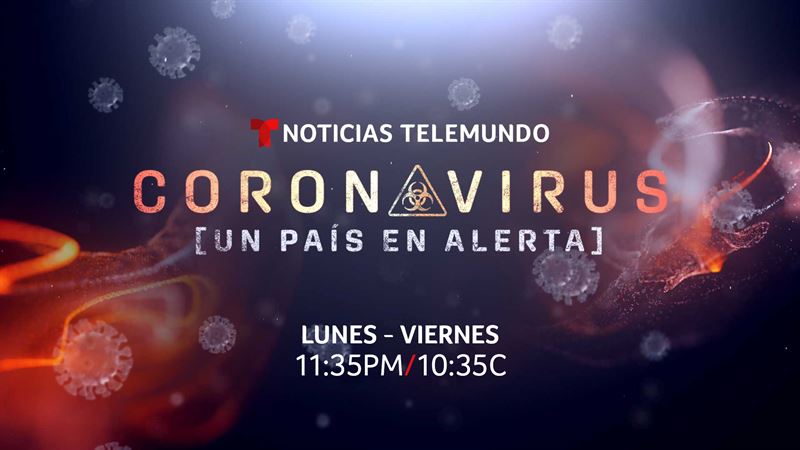 MIAMI – March 17, 2020 – Noticias Telemundo announced today the expansion of its network-wide initiative to keep the Latino community informed about the spread of COVID-19 with the launch of “NOTICIAS TELEMUNDO PRESENTA – CORONAVIRUS: UN PAÍS EN ALERTA” (NOTICIAS TELEMUNDO PRESENTS CORONAVIRUS: A NATION ON ALERT), a new national weekday newscast premiering today, March 17, at 11:35p ET/10:35p CT. Hosted by Noticias Telemundo anchor Julio Vaqueiro, the newscast will focus on the latest developments regarding the coronavirus and its impact on the Latino community as the country remains on alert during this national emergency.

“The launch of this new late-night newscast reaffirms Telemundo’s ongoing commitment to provide the Latino audience with the most comprehensive, credible information they need to make decisions every day,” said Luis Fernandez, President of Noticias Telemundo. “We want to help our community understand the effects of this emergency and rather than live in fear, be empowered to make informed decisions about their health.”

The late-night newscast will be anchored by Julio Vaqueiro, who previously anchored “Noticias Telemundo Fin de Semana,” the weekend newscast which airs Saturdays and Sundays at 6:30 p.m. ET and 5:30 p.m. CDT. An Emmy-award winning journalist, Vaqueiro has covered breaking stories from the emergency at the US-Mexico border to the War on Drugs and the Venezuelan crisis. He has secured exclusive interviews with 2020 U.S. presidential candidates including Senator Bernie Sanders and Elizabeth Warren and other distinguished world leaders such as Juan Guaidó. Before joining Telemundo Network in 2016, he was a co-anchor for Telemundo 52 Los Angeles/KVEA from 2013 to 2017. Vaqueiro also served as a Telemundo news correspondent in Mexico for “Al Rojo Vivo con María Celeste” and has collaborated with MSNBC as a contributor. Before moving to the United States, Vaqueiro was a news writer, reporter and anchor at Efekto TV in Mexico City. He earned his B.A. in communications from Universidad Anáhuac del Norte in Mexico City.

Telemundo Deportes’ Titulares y Más, the #1 sports studio show in Spanish-language media hosted by Ana Jurka and Karim Mendiburu, will now air in its new time slot at midnight during the week, while Zona Mixta, the weekend edition, will continue on its regular scheduled slot at 11pm ET (or following local news). TYM and Zona Mixta will also be available via the Telemundo and Telemundo Deportes apps.

In addition to the launch of the newscast, Noticias Telemundo will continue to report the latest breaking news and information on the coronavirus pandemic through several linear and digital efforts, including: