Helmers of Diverse Backgrounds to Rotate Through the Network’s Hit Alternative Daytime, Primetime and Late Night Shows with the Goal of Directing a Segment

Participating Series Include “America’s Got Talent,” “American Ninja Warrior,” “A Little Late with Lilly Singh,” “The Kelly Clarkson Show,”
"Making It,” “Songland,” “The Titan Games,” “The Voice” and “World of Dance” 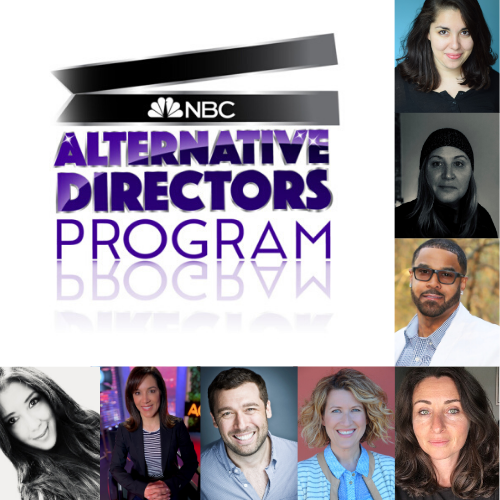 UNIVERSAL CITY, Calif. – Feb. 14, 2020 – NBC has announced the 2019-20 class of its Alternative Directors Program, the industry’s first directing pipeline program for unscripted shows that strives to create equal representation behind the scenes on alternative series.

Launched in 2018, the initiative gives experienced female and ethnically diverse directors the opportunity to expand their repertoire of alternative formats and complex directing styles with the ultimate goal of hiring them as show directors on an NBC or Universal Television Alternative Studios series.

This year, the program directors will rotate through two to three alternative shows across the network’s daytime, primetime and late night line-up. During their tenure on each show, they will shadow the respective show directors through prep and production with the goal of directing a meaningful segment on one of the shows they shadow. The show directors will also serve as their mentors and advocates. Following the program, they will be considered for available series directing positions on NBC and Universal Television Alternative Studios shows.

The first year of the program already boasts success stories: two directors from the inaugural class were hired for their first directing roles on NBC alternative shows. Carrie Havel was the series director on the first season of the network’s comedy competition “Bring the Funny” and Sharon Everitt directed on the first season of the late night show “A Little Late with Lilly Singh.” Additionally, the inaugural class directed segments on “American Ninja Warrior,” “America’s Got Talent,” “Making It," "The Wall” and “World of Dance” during their tenure in the program.

“In just one year, the Alternative Directors Program has already proven that by giving opportunities to talented diverse directors, we can increase representation behind the scenes on alternative shows and begin taking steps to change the landscape of our industry,” said Meredith Ahr, President, Alternative & Reality Group, NBC Entertainment. “Our program has been a top priority for us to institutionalize change and one of the many ways we can bring new perspectives to the unscripted space.”

Chosen from a pool of more than 100 applicants, the new class are experienced directors who have worked on unscripted content including shows such as VH1’s “Storytellers,” “Ink Masters” and “Full Frontal with Samantha Bee” in addition to morning talk shows, award shows, sporting events, and concert films for platinum-selling recording artists.

Below are bios for the Alternative Directors Program 2019-20 class.

Adair is a graduate of S.I. Newhouse at Syracuse University and joined the DGA in 1996.

ANA BRETÓN
Bretón is a two-time Emmy Award-nominated filmmaker focused on comedy and unscripted television. She is passionate about directing and seeing more women and people of color on and off the screen.

Bretón currently directs and produces digital and field content for “Full Frontal with Samantha Bee.” She previously directed and produced for Comedy Central, IFC, GQ, UCB Comedy and Seeso. She was a camera operator for the documentary “In Football We Trust,” which premiered at the Sundance Film Festival in 2015 and won an Emmy in 2017. This past year, she directed the pilot for “RUN,” an unscripted docu-series about women running for political office. Bretón was born in Mexico City and currently lives in New York. She is actively seeking representation.

DALE LEWIS
Born and raised in West Philadelphia, Lewis moved to Southern California to attend film school. Upon receiving his bachelor’s degree from Cal State Northridge, he independently produced and directed numerous projects including the documentary “The Other Side,” short film “Hopeless,” feature film “Branded” and TV projects such as multi-cam comedy “Big Black Comedy Show,” “Diversity in the NFL” award show for the NFL and Super Bowl 50, unscripted television pilot “Young, Rich & Famous” and episodic television pilot “Eye for an Eye.” He has also directed projects for Tommy Hilfiger and Taraji P. Henson.

Lewis’ ultimate goal is to direct unscripted shows on broadcast television. He is actively seeking representation.

JUSTIN MABARDI
Mabardi is a multi-camera director and creative producer with significant experience in the production and development of live stage shows, live shows for television and television formats. He currently serves as the creative producer on ABC’s “Dancing with the Stars” and “American Idol.”

He recently directed Red Bull's “Soapbox Race” in Cincinnati, Red Bull's “Flugtag” in Boston, Nashville and Pittsburgh for Red Bull TV and the World Mixed Martial Arts Awards for Fox Sports from 2016 until 2019. In 2019, he served as a creative producer on NBC’s “Bring the Funny” season one finale and co-executive producer on “World’s Got Talent” for Hunan TV and Fremantle. Prior to that, he produced two seasons of Fox’s “The Four” and more than 500 live performances for NBC’s “America’s Got Talent.”

STEPHANIE MEDINA
An Emmy Award-winning director, Medina’s first love is anything live. She has directed Fox NFL Sunday for the last seven years, including the pregame shows for three Super Bowls. Medina is currently directing “Access Hollywood,” which relaunched in 2019 as a live show, as well as sister show “All Access,” both for NBC.

She got her start in the television at KCAL and KTLA. She became the associate director and eventually the director of “KTLA Morning News,” for which she won four Emmys for Outstanding Director. Medina was also nominated for an Emmy for Outstanding Talk Show Director for her work on “Sunday Morning Shootout.” She has directed several red carpet shows for the Emmys, Grammys and Golden Globes and is a graduate of California State University, Fullerton.

JP PEREZ
Producer-director Perez has more than 15 years of TV and film production experience. Her passions lie in directing non-fiction projects told from a Latina perspective. Her documentaries “Mistura, The Power of Food” and “Finding Gaston” have screened and received awards at the Berlinale and San Sebastian Film Festival, where she won Best Culinary Film. Her projects have been broadcast in more than a dozen countries around the world for many networks, including National Geographic, Netﬂix, Canal Plus and Amazon Prime.

She was accepted into the competitive DGA Trainee Program in 2013 and graduated as a second assistant director. In the following years, she worked for several studios and networks, including Disney, Paramount Pictures, Showtime, CBS and ABC. Perez is currently working in post-production for three documentary projects: “The Anatomy of Chocolate,” “What Do You See?” and “Yanapanakusun.”

Born in Peru, she earned her Bachelor of Arts degree in film and TV production in Lima before coming to the U.S. to study film by way of the prestigious Fulbright Grant. At Ohio University, she received her Master of Fine Arts degree in film directing. She is actively seeking representation.

LAUREN QUINN
Quinn has more than 18 years of experience in television, managing both live event and studio production crews.

She has been directing live events, television concerts and specials for the past 10 years. Projects include VH1’s “Trailblazer Honors,” multiple “Ink Masters” season finales for Paramount Network, MTV’s “Video Music Awards Preshow,” multiple BET Social Awards, and MTV’s “The Challenge: Dirty Thirty Reunion Special.” She began her television career at VH1 on the concert and live event team in 2001 before directing on the reboot of “Storytellers.”

Quinn received her Bachelor of Arts degree in journalism from Rutgers University and currently resides in Hoboken, N.J. She is represented by ICM Partners.

JEANNIE ROSHAR
Roshar has directed numerous successful video campaigns for Marvel, Disney/Lucasfilm, Disney/ABC Home Entertainment, Corona and Microsoft. Her campaigns have won Webby, Telly and IDEA awards. She recently directed a breastfeeding campaign for the state of Texas that was noted for having an all-female cast and crew from principal production through post production.

Roshar and writing partner Gary Anthony Williams are the creators, writer-producers and directors of the award-winning “Life Hacks for Kids” for Dreamworks TV and the subsequent “Life Hacks for Kids on the Road,” a half-hour series for Universal Kids.

She has written and directed four other series for Dreamworks TV, as well as three short-form series, “Do It Duo” on Disney Channel, “Snackdown” on Disney Jr. and “Just Kidding” on Disney XD. Roshar also directed the Looney Tunes Lunchtime Challenge for WB Kids, the short “Weekend Dads” for Zeiss and the pilot “Pencils Down” for College Humor. She is actively seeking representation.

ABOUT THE ALTERNATIVE DIRECTORS PROGRAM
Launched in 2018, the Alternative Directors Program is NBC’s annual directors’ initiative that addresses the need for more representation behind the camera in unscripted programming. Intended for experienced female and ethnically diverse talent, the program gives unscripted directors the opportunity to shadow seasoned directors across several NBC shows and Universal Television Alternative Studios series. The rotational program aims for the finalists to direct a meaningful segment by the end of their tenure. The network’s ultimate goal is to extend the industry’s pool of experienced diverse directors who can work in various alternative formats, and feed the pipeline for unscripted directors on NBC as well as shows produced by Universal Television Alternative Studio. Following the program, two directors from the inaugural class were hired for their first directing roles on NBC alternative shows: Carrie Havel (“Bring the Funny”) and Sharon Everitt (“A Little Late with Lilly Singh”). The Alternative Directors Program is one of the tent pole initiatives within the NBC Talent Infusion Programs (NBC TIPS) that promotes and encourages people of diverse backgrounds to become the next generation of storytellers. For more information, visit NBCUniTIPS.com.

ABOUT THE NBC TALENT INFUSION PROGRAMS (NBC TIPS)
Since 2000, NBC has been dedicated to discovering and nurturing on screen and behind-the-camera talent of diverse and inclusive backgrounds through the NBC Talent Infusion Programs (NBC TIPS). NBC TIPS are amongst the most extensive and robust diversity and inclusion programs in the television industry. They feature more than 20 programs, including Writers on the Verge, the Diverse Staff Writer Initiative, Female Forward, the Alternative Directors Program, the Emerging Director Program and the StandUp NBC nationwide search for stand-up comedians. Program alumni are celebrated producers, writers, directors and actors in the entertainment industry who have gone on to win Emmys, Golden Globes and SAG Awards and include Alan Yang, Mindy Kaling, Deon Cole, Lil Rel Howery, Keto Shimizu, Natasha Rothwell, Danny Pudi and Danielle Sanchez-Witzel. For more information, visit NBCUniTIPS.com.