GET READY TO VOTE FOR YOUR FAVORITE SINGERS ON TELEMUNDO’S 'LA VOZ' (THE VOICE) STARTING THIS SUNDAY, JULY 26 AT 9PM/8C

Coaches Luis Fonsi, Alejandra Guzmán, Carlos Vives and Wisin will Challenge Each Other with Members of Their Teams in 28 Spectacular Musical Performances During “Los Enfrentamientos” (The Cross Battles) Before the Viewers’ Vote Opens on Telemundo.com/LaVoz and Xfinity X1 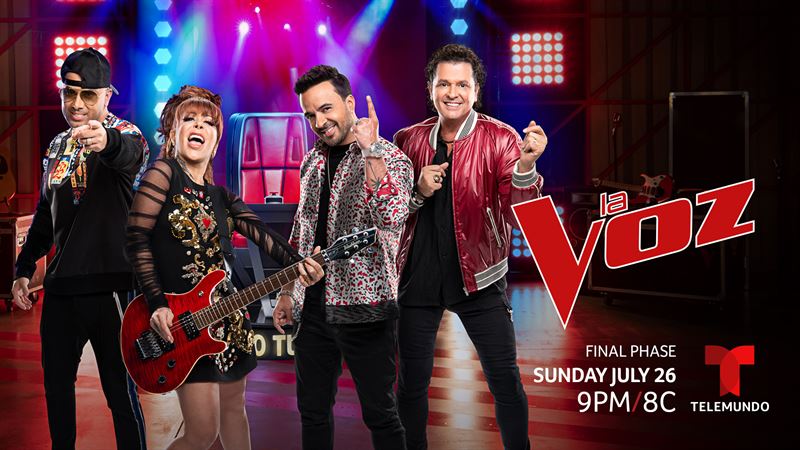 MIAMI – July 22, 2020 – Coaches Luis Fonsi, Alejandra Guzmán, Carlos Vives and Wisin welcome back the remaining 28 contestants to compete in “Los Enfrentamientos” (The Cross Battles) on Telemundo’s "La Voz" starting this Sunday, July 26 at 9pm/8c. During the final rounds, coaches will challenge each other with members of their teams as they present spectacular performances. Voting will be available exclusively to viewers across the U.S. and Puerto Rico on Telemundo.com/LaVoz and with the Xfinity X1 voice remote, where they can vote for their favorite contestants right after each enfrentamiento. Singers with the lowest number of votes are sent home and those receiving the highest votes will secure their place in the Semifinals. Hosted by Jacky Bracamontes and Jorge Bernal, this season’s winner will receive the epic $200,000 cash prize and a recording contract with Universal Music Group to produce, record and commercially release a single.

Fans can also join Latin pop duo Mau & Ricky on El Comeback Stage next Monday, July 27 at 10am ET via Telemundo.com/elcomebackstage and the official Twitter account, @LaVozUS. The winner of “La Voz” digital series will join the winners of “Los Enfrentamientos” during the Semifinal of the hit singing competition and have a chance to win it all.

Through Telemundo.com/LaVoz and the La Voz US YouTube channel, fans can get closer to the action alongside Nastassja Bolívar, who offers the latest scoop, interviews, music performances and photo galleries. Users can also obtain additional content across Facebook, Twitter, Instagram, Tik Tok and Snapchat by following @Telemundo and @LaVozUS and using #LaVozUS, #TeamFonsi; #TeamGuzman; #TeamVives; and #TeamWisin.

Audiences can enjoy full episodes of “La Voz” live or catch up on the Telemundo app available on Google Play Store and Apple Store, or by visiting Telemundo.com/LaVoz.

“La Voz” is a production of Telemundo and ITV Studios. The series is created by John de Mol, who serves as executive producer along with Cisco Suárez, EVP of Primetime Non-Scripted Programming at Telemundo, Macarena Moreno and Moira Noriega.